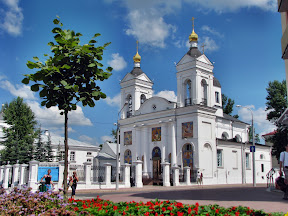 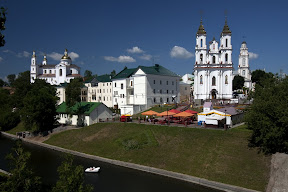 The old Belorussian city of Vitebsk was founded by Princess Olga in 974. The administrative centre of the province of the same name, Vitebsk is situated on the West Dvina in north-eastern Belarus. It has a favourable geographical location, lying at the intersection of routes from the West to Russia, from Russia to the Baltic and from St. Petersburg to Odessa. There are more than 60 large state-run and private enterprises and more than 100 small businesses in the city. The most important branches of industry are mechanical engineering, metal- and timber-working industries, light industries and food industries. Sawn timber, carpets, fabrics, clothing, shoes, televisions, clocks and watches are all important products.Vitebsk is a town of science and culture. There are within others three universities, a veterinary academy, nine professional schools. From the many cultural establishments we shall only mention the Belarus dramatic theatre »Jakub Kolas«, Doll theatres "Ljalka", numerous cultural centers, museums and libraries. 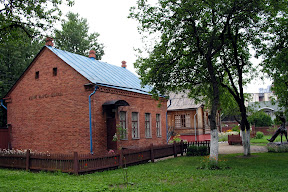 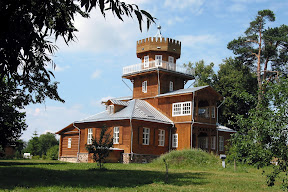 The life and work of Marc Chagall (1887-1985), who was born in Vitebsk, are documented in the Chagall Museum and Chagall’s childhood home which was opened on the 110th anniversary of the artist’s birth. Even today, artists such as Ilya Repin, Kazimir Malevich and Yehuda Pen, whose art school in Vitebsk greatly influenced Chagall’s oeuvre, are regarded as role models for the Fine Arts in Vitebsk.

Vitebsk is rich in places of historical and cultural interest such as the City Hall built in 1775, the 12th century Annunciation Church and the Orthodox Church of the Kazan Blessed Virgin built in 1760.

A popular location for music festivals, Vitebsk has a long tradition of classy jazz festivals and has also hosted the International Festival of Modern Choreography since 1987. 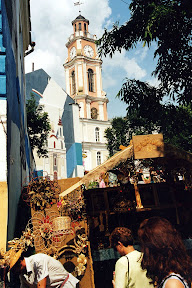 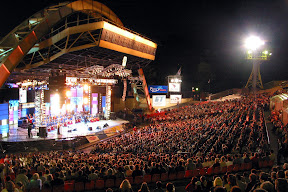 The Slavonic Bazaar, an international arts festival, has been one of the major cultural events in Europe since 1992 and received the FIDOF “Festival of the Year 2000” Award in Cannes in 2001. 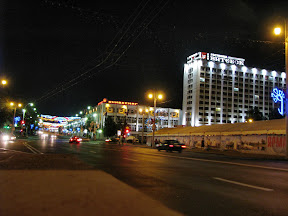 Each year at the middle of July, thousands of in and foreign artists, actors and dealers come to Vitebsk with hundredthousands of Witebsker and their guests for one true week of music and other events. Main stage is the Amphitheater (on 6.500 places, extended with roofing).

Witebsk is although a sport city with international stadium and indoor ice rink. Worldwide successes of the Gymnastics, trampoline, acrobatics, boxing and biathlon schools are a testimonial to Witebsks sporting history.

In the town’s picturesque surroundings there are recreational homes, sanatoriums and holiday camps for children.